In most cases, the symptoms of stomach ulcers in adults develop acutely, on a background of chronic gastritis with high acidity or superficial atrophic changes of the gastric mucosa.

A stomach ulcer is a defect that is capable to progress, gradually going deeper in the submucosal and muscular layers of the body. Chronic gastric ulcer is characterized by a change of the acute period of remission, exacerbation ends with scarring of the ulcer.

According to clinical studies, the main cause of the disease – the presence of Helicobacter pylory in stomach of a patient.

The development of ulcers

Peptic ulcer refers to polietiologic disease, because the presence of only bacteria, not all cases leads to the appearance of clinical manifestations of this disease. There should also be present mechanical, chemical and physical triggers. It is the combination of several factors causes ulcers of the stomach and intestines.

There is a continuing trauma roughage superficial layer of the mucosa of the stomach provokes the symptoms of erosive gastritis, and lack of treatment creates favorable conditions for transition of this pathology peptic ulcer disease. Negative impact of heat and radiation damage of the gastric mucosa.

In the early stages of development of ulcers appears:

The most common symptom of the disease is pain. However, not all, feeling an attack of severe pain in the stomach, rush to visit the doctor, which leads to late diagnosis of the pathology. Pain syndrome is different because of the seasonality of the development of pain: spring, autumn. The rest of the time severe pain gastric ulcer no. 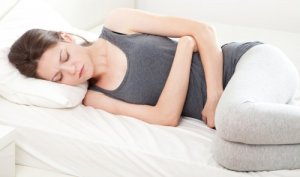 If you visit a specialist revealed the first signs of stomach ulcer and an adequate medical therapy, the patient followed strict diet, it is possible that peptic ulcer disease will no longer to disturb him. But even after treatment is to follow the advice of your health care gastrology food diet. About what foods are permitted and prohibited, in detail tell the doctor.

This approach to the treatment of stomach ulcers will help to prevent worsening and spread of the disease on the intestinal wall and reduce the risk of complications.

Aggravation or development of this form of ulcer is manifested by pain of a burning character. Pain noted in the epigastric region, often accompanied by heartburn.

In the period of exacerbation appear nausea, vomiting and unpleasant smell from the oral cavity of a patient with gastric ulcer. This testifies to stasis and fermentation of food in the stomach. Due to motility disorders of the gastrointestinal tract, the patient noted the appearance of intestinal colic and constipation.

Gastric ulcer disease with progressive course may have complications, adverse to the patient's life.

Develops due to violation of integrity of vascular wall pathological process in the deepening of the ulcer. In this complication of patients report vomiting, while vomit resemble coffee grounds. Stool darken and eventually turn black (called melena). Due to chronic blood loss the patient develops anemia: 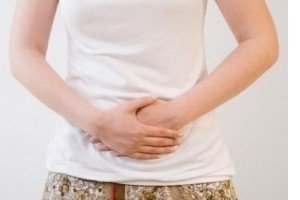 The emergence of these symptoms should direct the patient directly to the doctor, because if the volume of blood loss from the ulcer is large and time will not be assisted, it may be fatal.

Peptic ulcer may be complicated by ulcer perforation or perforation of the ulcer. While stomach contents – food and digestive enzymes enter into the abdominal cavity, which leads to the development of peritonitis. The pain is extremely pronounced due to stimulation of receptors throughout the peritoneum and intestines,sudden weakness, stomach muscles tense, in a short time symptoms of intoxication.

This complication not delay, because getting digestive enzymes not only have an irritating effect on the peritoneum and abdominal organs, but also begin to digest them, and this can lead to irreversible intestinal damage.

Peptic ulcer with this complication is characterized by the transition of pathological process from the stomach to adjacent organs: intestines, pancreas and others. In the end, the bottom of the ulcer is getting close to its body. And irritating and destructive action of pepsin and hydrochloric acid cause the appearance of reactive changes, and the organ is inflamed, there is, for example, reactive or destructive pancreatitis.

In this complication the patient complains of the appearance of a sharp pain encircles, possible increase in body temperature, with the involvement increases pancreatic alpha-amylase in the patient's blood.

Stomach ulcers can be complicated by cancer, which is caused by degeneration of an ulcer into a malignant neoplasm. The development of this complication is characterized by weight loss patients on the background of good nutrition, with a pronounced aversion to meat, gradually, the appetite decreases. With the progression of the cancer symptoms of intoxication:

On the adverse prognosis in patient with gastric ulcer tells progressive weight loss, which is dangerous cachexia – exhaustion of the sick person.

Stenosis of the pylorus 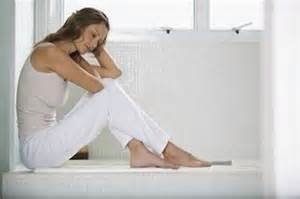 Develops at the location of the ulcer in the pyloric stomach is the narrowest it Department. The pyloric division passes into the duodenum. With frequent exacerbations and severe noted pronounced narrowing of the large amount of scarring on the mucosa. The appearance of pronounced narrowing impedes the passage of chyme – food that is exposed to hydrochloric acid and pepsin, which leads to stagnation in the stomach.

Depending on the degree of narrowing stenosis of the pylorus has 3 stages:

Detection of signs of stomach ulcers in the early stages of development and treatment by a specialist can slow the progression of disease and prevent the development of complications of the disease, and will also minimize the need for surgical treatment of ulcers.