One of the best ways to get a full idea of how well a particular organ is ultrasound. Ultrasound of the stomach and esophagus is applied during examination of the digestive system in certain diseases.

Indications and methods of preparation for the study

Done ultrasound of the stomach after ten hours since the last meal. In addition, a few days before the examination the patient may need to renounce:

Another rule becomes the Smoking ban before the procedure. Such standards need to be prepared to at the last moment not to break.

How is the procedure

Ultrasound of the stomach can be done in two ways. The first of them is the survey on the surface of the anterior abdominal wall, and the second involves the introduction of the probe. After will prepare equipment, a person is placed on his back and after lubricating the sensor with a special gel hold it against the body. During the examination the patient drinks a little water, and the inspection continues. This is necessary in order to see how the liquid enters the stomach.

The whole procedure lasts no more than 7 minutes, during which the doctor manages to make all the necessary observations. With the introduction of the probe, the patient lies on his right side and he is introduced through the esophagus a device for endoscopy. This method allows you to make more detailed observations. The duration of the survey with this method is 15 minutes.

Ultrasound of the stomach with contrast is carried out in three stages. On the first of these is preparation: the examination is carried out at a time when a person is hungry and his stomach empty. At this time, the device shows the wall thickness and the diameter of the cross section.

In the second stage, the patient is asked to drink 500 ml of boiling water. After that, the doctor is watching the events in the digestive system changes. After 20 minutes, the emptying of the stomach. This method is important in the diagnosis of motor functions. Throughout the entire process ultrasound of the stomach is estimated the rate of filling and emptying of this organ.

What the survey shows? During the ultrasoundstomach, the doctor can detect:

It is better to do ultrasound or gastroscopy?

Each of these methods has its advantages and disadvantages. For example, some of the changes occurring in the tissues can only be observed in ultrasonic inspection, while the other shows only the method of introducing the endoscope.

One of the main advantages of ultrasound of the stomach include the ability to determine blood flow vessels. In addition, with the help of the equipment body can be seen very well from many angles. And the ability to record the process of research makes this method one of the best. 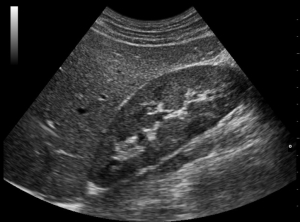 The advantage for patients is that there is no need to enter anything inside. To prepare for this option is much easier, it eliminates emotions and unpleasant physical sensations. At the same time for the procedure takes much less.

The result of the action ready immediately after manipulation. After a short period of time the doctor prints your conclusion on letterhead and stores the record of the ultrasound examination. The conclusion indicates the General condition of the patient, and revealed pathology. In addition, there is the video that shows the whole process.

The use of an endoscope

When doing a gastroscopy, it is possible to take a biopsy and examine the stomach in its natural form, but he is only seen from one angle. In any case, choosing a doctor based on the need for better evaluation.

The study of the esophagus

To prepare for the ultrasound examination of the esophagus can be the same as for a similar procedure performed with the stomach. On the instruments the physician pays attention to changes in the diameter of the body during swallowing, and the presence of various pathologies.

Indications for this procedure:

Appointed by such diagnostic procedures only physician who the results of the survey will diagnose and prescribe treatment. From our site you can free online consult a doctor.