Analysis of Helicobacter pylori and its norm

Home / Procedures / Breath test for bacteria Helicobacter pylori: the features of the

Breath test for bacteria Helicobacter pylori: the features of the

Have you thought ever that you have in the stomach can live bacteria? Such, for which the stomach lining can occur wound? A simple breath test for H. pylori can now be done by anyone. In today's world this is important, because everyone knows that health is everything, and these bacteria are the causative agents of gastritis and ulcers.

More recently, in 2005, scientists Robin Warren and Barry Marshall won the Nobel prize for his discovery. They found that in fact is the cause of the emergence and development of these dangerous diseases of the stomach and intestines like gastritis and ulcers. Before this discovery it was believed that the cause of such diseases are increased acidity and poor diet. But the Nobel laureate was able to prove to the world that gastritis and ulcers occur because of bacteria, namely Helicobacter pylori.

Now everyone can check the status of your digestive tract simply by making a test of Helicobacter. It doesn't take much time and does not need to exert any effort.

How to identify bacteria

Bacterium Helicobacter pylori in an aggressive acidic environment of the human stomach survives because she emit ammonia gas and surrounds himself with them as a protective capsule.

Infection with a dangerous pathogen often occurs in early childhood. Immediately after ingestion the bacteria begin to multiply, and the infection eventually chronized. There is a high probability of development of gastritis and peptic ulcer-erosive processes in the stomach.

If in a medical institution was established the bacterial origin of gastritis or gastric ulcer, then treatment, which is associated with the destruction of Helicobacter pylori with special anti-bacterial drugs.

It is possible to determine the presence of bacterial infection not only through a breath test for Helicobacter, but also in the study of fragments of the mucous membrane of the stomach (taken during a biopsy). In addition, you can use another method – indirect method of diagnosis, while you investigate the titer of antibodies to the bacterium Helicobacter. But the results of such diagnostic procedures are not always accurate, and modern medicine increasingly began to use a different test for Helicobacter pylori. It was called a breath test.

The analysis of the breath test based on the ability of H. pylori to produce large quantities of urease. Hence the name – urease test. It is a hydrolytic enzyme that breaks down urea to ammonia and carbon dioxide. Need to do a full analysis of air,which exhales a patient after he drinks a solution of urea. It's very simple. Test preparation does not take much time breathing analysis is quick, and results can be read within a short period of time. 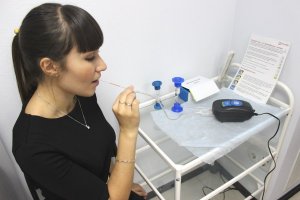 Thus, the enzyme urease decomposes urea to ammonia and carbon dioxide. If the analysis of the breath test will show that the second bag a lot of carbon dioxide labeled with carbon 13C, it is possible to conclude that the patient is 100% infected with the bacteria Helicobacter pylori. The analysis will be called "positive", but the results for the patient such called hard.

In modern medicine, using special test systems that help to determine the Helicobacter in the stomach. They differ in ease of use, speed, absolute safety, the prep is not needed. To detect harmful bacteria can be used and a small breathing apparatus with a tube, in which the patient must breathe after ingestion of the urea solution. In the latter case, it is noteworthy that the carbon isotopes are not used. Thus, respiratory urease test of this type can be safely considered safe for pregnant and lactating women and for small children. Also, this analysis can be carried out at home.

How to prepare for a breathing test?

What you need to do before testing for H. pylori, so that the result was correct? This refers to the urease test. Before you can conduct such a serious procedure as the urea breath analysis, the patient must follow these simple rules:

Conduct a breathing test to determine bacteria Helicobacter in the stomach is very important at the slightest suspicion, it's so easy. Moreover, it is now possible to do this even at home. It is also possible to analyze Invitro. This means that the bacteria can be identified through blood or feces.

The procedure will not take much time, but it is very necessary. Bacteria Helicobacter pylori can live in the human stomach all the time, but manifest itself only when reduced the protective functions of the body: illness, injury, or stress. And to be infected with Helicobacter, you can even through dirty hands.